Limitation: Less than 50MB and 4 hours' packet sniffing each day

Why do we provide this free monitor tool along with the enterprise edition?

About this free monitor tool 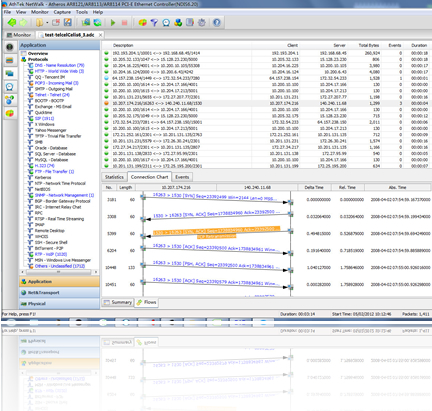 Experienced home network users and personal website owners will like this free monitor tool. Because it can help home network users to fast view their network analyzing reports and enable them to save bandwidth. Personal website owners can use this free monitor tool to test their site connections as well as to troubleshoot net errors.

See what the software editor has said this free monitor tool here.

Alex is SocialEngine's original designer and one of its co-founders. He now helps guide our development, marketing, and support teams to continue growing the company. A committed fanboy of beat music and experimental visual art, anything that has lots of lights, bleeps, and buttons will hold his attention for an inordinate length of time.

SocialEngine's co-founder and original developer, Charlotte specializes in the exploration and rapid development of new ventures. When she's not programming or wearing her entrepreneur hat, you can find her in the gym pursuing her powerlifting aspirations, or sipping a glass of Bordeaux in an attempt to expand her knowledge of wine.

Jung Ho Kim was this close to becoming an astronaut, but due to NASA's ridiculous requirements for PhDs and actual "flight" experience, he chose the more noble pursuit of computer programming. But fret not, space travel will commence in the near future.

I am enthusiastic about Web Standards; proficient with MySQL; I swear by the Unix/Linux command line; PHP is my second language. I'm an Object Oriented PHP & MySQL Application Developer with 7 years of professional experience developing website applications.

When she is not answering hundreds of emails and drinking hundreds of cups of tea per day, Mara is working on becoming the next Brian May, or in other words, doing astrophysics problems and playing the guitar AT THE SAME TIME.

Formally known as "Richard the Rocket Scientist". Exploration is my passion whether it be learning a new skill, hiking to uncharted territories, or expressing my dry sense of humor, life is a journey!

Urban Dictionary defines Matthew as, a sexy guy that liked the women and has a nice toothbrush. Just don’t diss his nice toothbrush, or you’ll awaken the Vatican-trained warlock assassin with a heart pumped by tiger blood. The guy needs his sparkly smile when he writes you emails. When Jung Ho Kim was asked, what three things would Matt want on a deserted island---an island that already has a gourmet chef, bikini models, and internet? Mr. Kim was left speechless. Sometimes, the best option is to brush your teeth and smile.

Vivian is a town in Louisiana, a census-designated place in South Dakota, and an unincorporated community in West Virginia. A character in Paper Mario, noted species is shadow, and has been affiliated with Shadow Sirens and Secret Society of X-Nauts. In human form while not completely distracted by shiny lights she works on becoming Ultimate Webligo Super to the Max Office Wizzzaard of Order in SocialEngine Land. Yes, that is the official title (magical fiery staff and all that jazz). She also looks forward to learning how to play Warcraft.

Another engineer, space geek, and musician, Matthew is a multi-talented machine. Besides being a cool kid drumming on stage with Keith Urban and Carrie Underwood for the filming of a concert DVD, he has worked for the US Environmental Protection Agency, on the imager for the James Webb Space Telescope, and he started a drum company in KY; selling Cajons from CA to NY by telepathy. He is also a Techstars Alum where he met Alex and Char. There is a strong possibility that he is visiting from another planet, or is secretly a figment of our imaginations, but we have yet to do an investigation.

The free home edition can only work 4 hours a day with less than 50 MB packet.